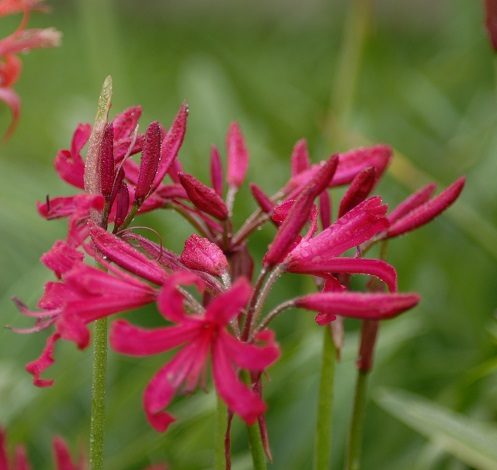 Nerines originate from South Africa, but some nerines are tough enough to withstand the UK climate and brighten up an autumn garden.

Hardy nerines are more widely available than tender ones, which are sold by just a handful of specialist nurseries.

The following won’t let you down and need little care. New colours are becoming available all the time and there may soon be a hardy red.

When the first signs of emerging flowers appear in autumn, give them a thorough watering. Don’t overdo it or the bulbs will produce a huge crop of leaves and very few flowers

Plant nerines in spring in free-draining soil at the foot of a south-facing wall, where they can bake in the sun.  Plant three or four in an 18cm pot, with the shoulders of the bulbs just under the compost and the necks protruding. Finish with a 1cm layer of grit to prevent water sitting next to the bulb and causing it to rot.

If you have heavy garden soil or are growing the tender kinds, grow them in pots of John Innes No3, the soil-based compost, with some grit to improve drainage.

Leave the pots in a sunny spot on the patio and bring them indoors when the first frost is forecast.

After the leaves die down in early summer, keep them dry. The bulbs soon begin to multiply. Do not be too quick to divide and re-pot the clump, as they like to be overcrowded.

Planting associations – Nerines look great against dark or evergreen backdrops, mixed with the primary blue Salvia patens, set against the smoky purple leaves of Vitis vinifera ‘Purpurea’ or among other patio containers.

Use them to replace bedding plants that are past their best.